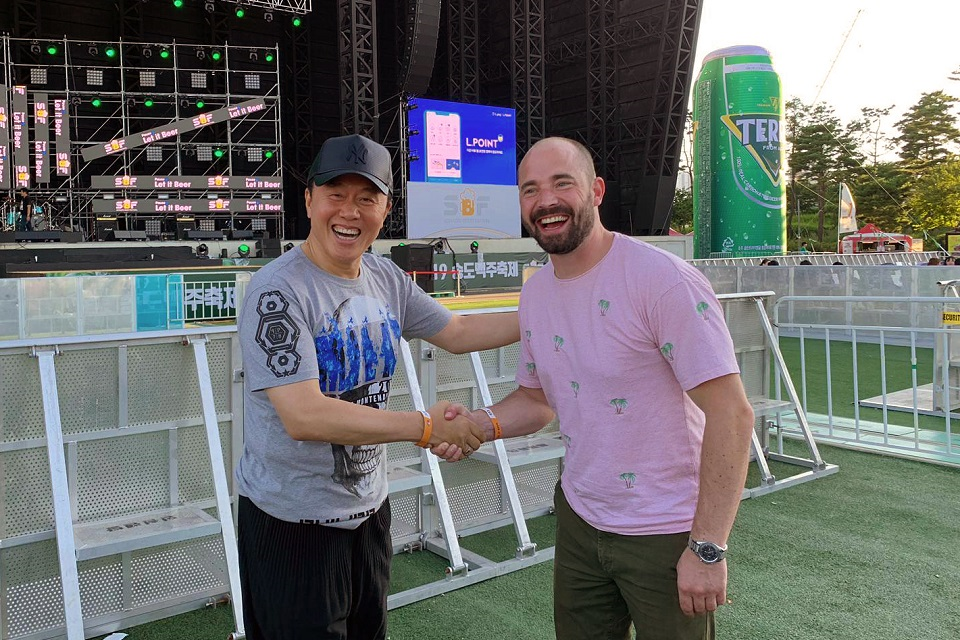 A big new addition to the advisory board of GET Protocol, the blockchain-based ticketing solution that allows ticketing companies to sell honest and innovative tickets.

After several years of building the system and creating significant adoption in The Netherlands— selling over 350,000 smart tickets to date — the time is right for Mr Jung Won-Kwan to leverage his insight and connections with the goal of quickly establishing a significant foothold for GET Protocol in the South-Korean market.

Mister Jung Won-Kwan, or 정원관, has a longstanding presence in the South-Korean entertainment business and is known and respected throughout the country.

He is an iconic figure and innovator in the world of K-Pop, owing to the fact that he was one of the three original members of SoBangCha, (or ‘Firetruck’ in English) which is regarded as the first K-Pop group to exist in the world.

‘In 1987, a trio called SoBangCha (“Firetruck” in English) was stealing the hearts of just about every Korean girl on the peninsula. While it was not unusual for groups to incorporate certain visual styles or complex choreography into their performances, this seemed to be the group the not only standardized these elements into a single format, but seemed to make them necessary for future acts.’ — Source.

Since his years as an artist, Mr Jung has taken on several other influential roles within the Korean entertainment industry. He was the CEO of ‘Bugs music’, one of the largest music streaming services in Korea with 20 million users. Currently he is a senior advisor of several major entertainment companies in Korea that manage singers, actors, festivals and musicals.
Additionally, Mr. Jung is a jury member of several K-Pop awards and has a passion for honest ticketing.

The GET Protocol team is proud of this addition to the advisory board, and is looking forward to seeing the first ticket sales in Korea get underway.

Maarten Bloemers, CEO of GET Protocol: ‘If you would have told me three years ago that we would be bringing GET Protocol to Korea already, I wouldn’t have believed you — but, here we are. And we are happy to be here!

Thanks to the addition of Mr Jung, already doors have been opened that I wouldn’t have dared to dream of before — and we are only just getting started.

I am beyond excited for everything that is to come in this new chapter of GET Protocol and our mission for world domination.’

The Korean market is very promising for GET Protocol, as it bares lots of similarities to the Dutch one, where the system has been put to extensive use already. South-Korea has a comparable political landscape and a widespread desire for a solution to the problems that exist with regards to the issues of ticket scalping and fraud. The only difference is that South Korea has 9 times the population of The Netherlands.

‘Currently, unauthorized ticket trading constitutes a misdemeanor under the Minor Offenses Act, but only if it takes place on the scene — that is, offline. Online ticket brokers cannot be prosecuted under the law as it is currently written.’ — Source.

With Jung Won-Kwan on board, the crusade for honest and innovative digital ticketing throughout South-Korea can begin!

The first Korean pilot events have already been conducted, and plans are in the works to quickly roll-out a local ticketing entity that will begin issuing tickets for larger Korean events.

The timing coincides perfectly with the scaling up of the GET Protocol system and its capabilities. This is in line with the stadium shows, sold-out national comedy tour and recent festival that have been announced over the past year by another user of GET Protocol, Dutch ticketing company GUTS Tickets.

An important part of the workings of the protocol is the GET token. This is a utility token, which serves a valuable purpose as a type of fuel for the smart tickets that are issued by the protocol.

For every smart ticket that is issued using the protocol, GET is required to enable its features and usage. At the end of an event cycle, an amount of GET is ‘burned’ and taken out of circulation forever.

There is a lot more to be said about the tokenomics of GET; for this you can take a look on the token page of the GET Protocol website.

Currently the GET token is traded on the following exchanges:

As The GET Protocol foothold and community in Korea grows, we will also facilitate accessibility to the token and project news for Korean traders!

If you are not yet experienced with trading at these exchanges, or with buying crypto in general, the following blog walks you through it step by step.

More about GET Protocol

Have any questions or want to know more about what we do? Join The GET Protocol active Telegram community for any questions you might have, read the whitepaper, visit the website, join the discussion on the GET Protocol Reddit. Or get yourself a smart event ticket in the sandbox environment. Download the GUTS Tickets app on iOS or Android.